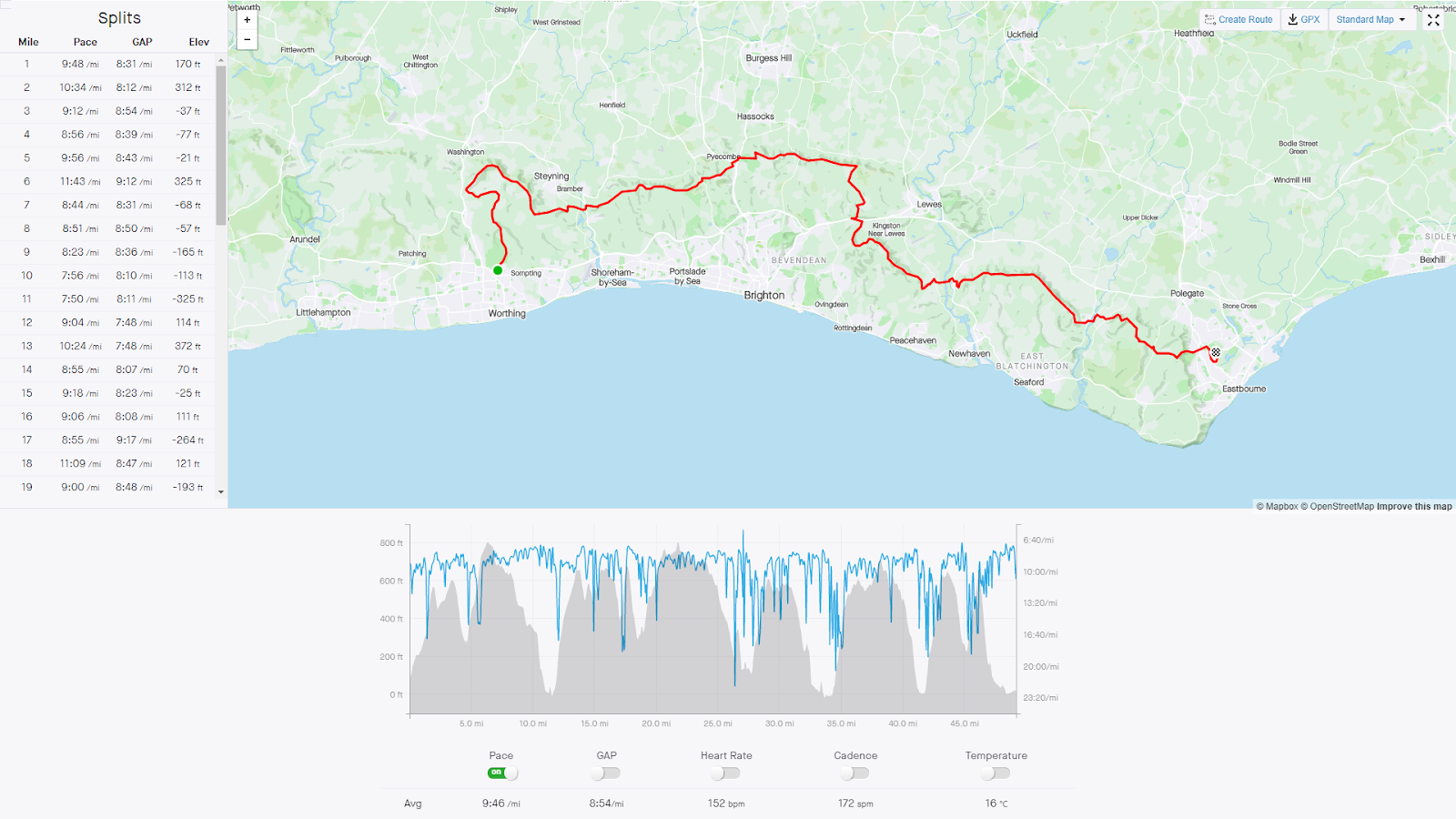 As I walked the sort distance from the car park to the seafront Travelodge the afternoon before the race, I could hardly move forwards, so strong was the wind, and it was forecast to get worse throughout the evening. Not the most encouraging of afternoons, considering the following day was to be spent mainly on the top of an exposed ridge along the latter half of the South Downs way, running from Worthing to Eastbourne for the Centurion SDW50, postponed from the usual early April slot, to the end of Oct due to Covid.

And get worse it did, the rain in the evening lashed down and huge waves crashed on the pier whilst I went for an evening walk, though it was due to stay mainly dry the following day, it was still a little disconcerting, but I was glad that at least I’d been able to make it to Worthing, as up until the day before it had seemed that extra travel restrictions due to Covid would be applied in my local area, and I’d be unable to travel to race. So a wet and windy race is better than no race at all.

I’d got big hopes (relatively speaking) for this race. I was never going to be at the top of the race, but I felt pretty certain I’d be able to smash my 50 mile PB again on this one. The SDW course is easier going that CW50, it’s less twisty and turny, smoother trail and the hills are much more runnable, so I was expecting I’d be on for somewhere around 08:30.

Race morning, after a surprisingly good night’s sleep, I arrived by taxi at Worthing College, used by now to the time trial style of 2020 racing. I started a little earlier than planned, just before 06:20 and had to have my headtorch on for the early bits. I don’t think I’ve ever started a race in the dark before.

It was blowy, but dry at the start, and as I climbed the hill out of Worthing, it started to get light. The first 9 miles passed in a flash, about half of which were spent chatting to another runner about all the usual stuff and the miles just dropped away, before I knew it I was running down by the pig farm, knowing the first checkpoint at Botolphs was coming up. having run SDW50 and SDW100 last year I had a good idea of what to expect from the course(this works both ways, maybe it’s best to not know about the hill at Southease later on..)

Skies ahead looked OK, with even a few spot of blue, but glancing behind I saw a whole different story, some extremely angry looking very dark clouds were moving from the West, so it was clear we were in for a soaking imminently. Sure enough, the rain arrived, and it was fierce with the strong winds, so the waterproof went on and by the time I got to the aid station it was in full force. I felt for the volunteers as they were all soaked, it’s often harder to volunteer than it is to run, but none of this dampened (boom!) their mood.

So bottles refilled, and a malt loaf bar in hand, I ran (yes ran) up Beeding Hill. My race plan was to run the uphills as much as I could, keeping an easy but steady pace. I knew that if I wanted to hit my time goal, the hills were the key. Run the hills until the later stages of the race, and even then try to run bits of the uphills. Be the last to start walking, and the first to start running. Shaving a minute off each hill adds up.

The rain didn’t last long, and before I knew it, I was at Devil’s Dyke and passing the next checkpoint, which was slightly earlier than usual, just under a mile before the normal location of Saddlescombe Farm, which couldn’t be used today due to National Trust not allowing event infrastructure on their land. I’d worked out a pacing plan in advance, and new that if I wanted to stay on track for just under 08:30, I should be at CP2 in 02:30, and I was just a minute out.

It was funny how quickly the course was moving on, as the last time I ran this stretch was the SDW100, at a considerably slower pace, so it was surprising just how quickly each landmark or CP popped up today. Then it was down again to Pycombe, upagain through the golf course to Clayton, down again towards Housedean. I’d forgotten about that steep little section in the woods just before Housedean. As I got to Housedean the weather had turned bad again so I was grateful for the opportunity to have some shelter in the barn while I restocked drinks and snacks, then headed back out into the rain. My pacing plan sid I should be at Housedean for 04:11, and I made it in 04:14, so still on track as my plan gave me 5 mins spare. I wasn’t tied to the pace plan, I’d have been happy to abandon it if necessary, but I was feeling fine so it was good to know that I was on track to meet my goal.

Climbing up the hill just out of Housedean was one of the hardest stretches as the wind and rain were strong at this point, I’d cooled down whilst stopping at the CP and now my hands were freezing, I made a mental note to get some better gloves! Again the rain didn’t last long, and the by the time I was back on the top of the Downs, it had passed for now, and the descent towards Southease came pretty soon. I was a few minutes behind plan now, so I made the decision to push harder in the next stage to get back on track, but remembering how hard the stage from Southease to Alfriston had been on SDW100, I knew that this may not work out.

In SDW100 2019 this had been by far my worst stretch of the whole race, it took me over 2.5 hours to cover this and felt like much longer. As it happened, today I covered it less than half of that time. The hill out of Southease is the biggest on the course, and it feels like it goes forever, as just when you get to what you think is the top, you see that you actually need to keep on climbing. By now I was definitely walking more than running the ups, but I still managed a few bursts of running as I knew that there was a very real possibility this was the last race I was going to do this year, so I was determined to give it my best and leave nothing behind. The weather was reasonably kind on this stretch, and considering the rain over the last day or 2, the trail wasn’t too slippy or muddy.

And then the descent to Alfriston, and I was still moving well, and arrived at the village hall at 06:46, and by now I felt pretty confident I’d be able to get to Eastbourne in well under 1 hour 45 mins. A quick visit to the CP, and a fistful of dark chocolate covered coffee beans, and the climb began again. The climb out of Alfriston is not quite as big as Southease, but still considerable, and it was getting tough now, I still managed a quick jog uphill now and again, but it was mainly a hike up this one, but a decent run at the top, which for me is one of most most scenic parts of the whole course, with beautiful views, and down into Jevington.

I went straight by the CP at Jevington with no need to stop for anything, more coffee beans and up the last hill. This one is half as big as the last 2, but always feels hard at the end of a race and it’s good to hit the trig point, seeing Eastbourne lying below.

But don’t count your chickens yet, as the descent to Eastbourne is a nasty, slippy, uneven horrible bit of trail, commonly known as the Gully of Doom. I’d rather go straight down the steep bit to Bedes School that the Beachy Head Marathon Course uses. A slip of attention in the Gully of Doom could still be a big problem, so I took it steady and after what seemed like an age, I hit the streets of Eastbourne with about 1.5 miles to go. I’d not looked at my watch for a while now, so I’d lost track of time and where I was compared to my plan, as I’d been in survival mode since the climb from Alfriston, so I was a little shocked, and very pleased to see it was still under 8 hours.

The last few bits through the streets of Eastbourne are not very exciting, a far cry from the beauty of the Downs, but it’s not long until you get to the sports park, and I reached the finish in 08:10:47, better than I could have hoped for.

I was very happy with my finish time, and placing 24th out of 278, but more than that, happy with the fact that I’d learned from previous experience on this course, and had trained well since the same race in April 2019. I’d taken 80 mins off my time from last year, and the race had gone pretty much to plan, with a relatively strong finish. Looking back, had I know how close I’d be to a sub 8 hour finish, I’m sure I could have pushed a little harder, but then again, that’s what next time is for…